A truss is a structure composed of straight, slender members connected at their ends by frictionless pins or hinges. A truss can be categorized as simple, compound, or complex. A simple truss is one constructed by first arranging three slender members to form a base triangular cell. Additional joints can be formed in the truss by subsequently adding two members at a time to the base cell, as shown in Figure 5.1a. A compound truss consists of two or more simple trusses joined together, as shown in Figure 5.1b. A complex truss is neither simple nor compound, as shown in Figure 5.1c; its analysis is more rigorous than those of the previously stated trusses. 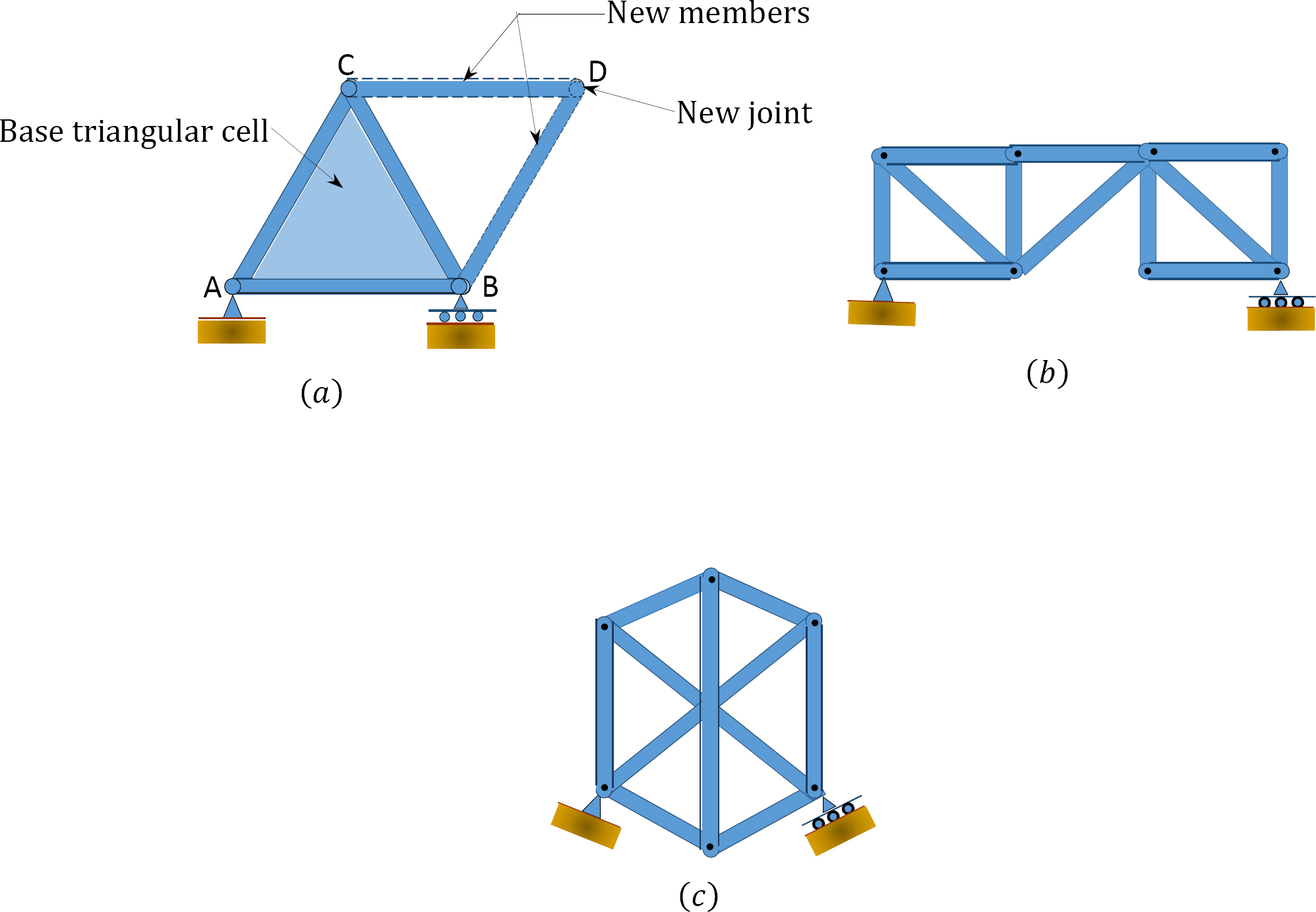 The following are examples of different types of trusses for bridges and roofs. 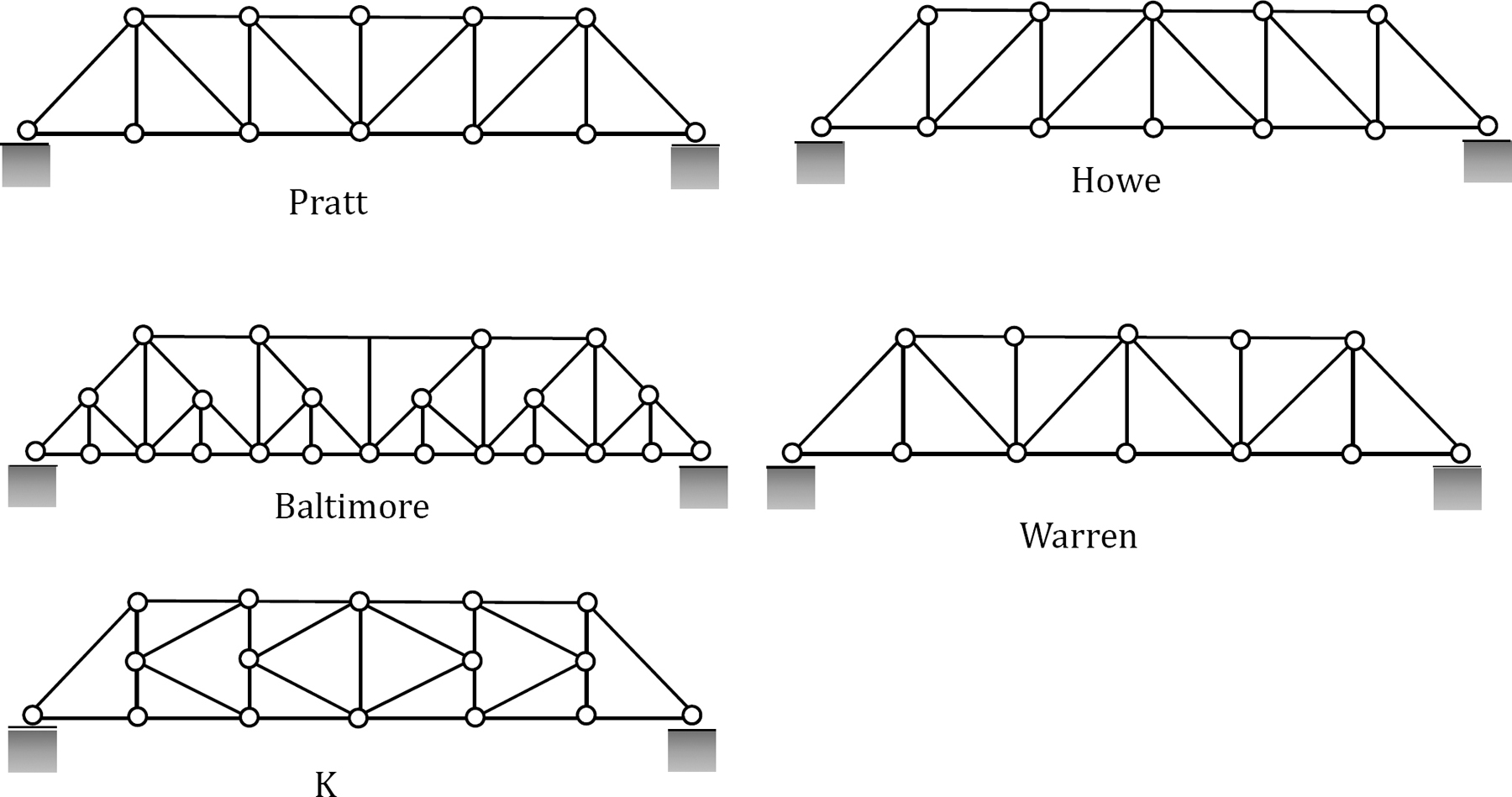 5.3 Determinacy and Stability of Trusses

The conditions of determinacy, indeterminacy, and instability of trusses can be stated as follows:

1. Members are connected at their ends by frictionless pins.

2. Members are straight and, therefore, are subjected only to axial forces.

3. Members’ deformation under loads are negligible and of insignificant magnitude to cause appreciable changes in the geometry of the structure.

4. Loads are applied only at the joints due to the arrangement of members.

Truss joints can be identified using alphabets or numbers, depending on the preference of the analyst. However, consistency must be maintained in the chosen way of identification to avoid confusion during analysis. A bar force can be represented by any letter (F or N or S), with two subscripts designating the member. For example, the member force FAB in the truss shown in Figure 5.4 is the force in the member connecting joints A and B. 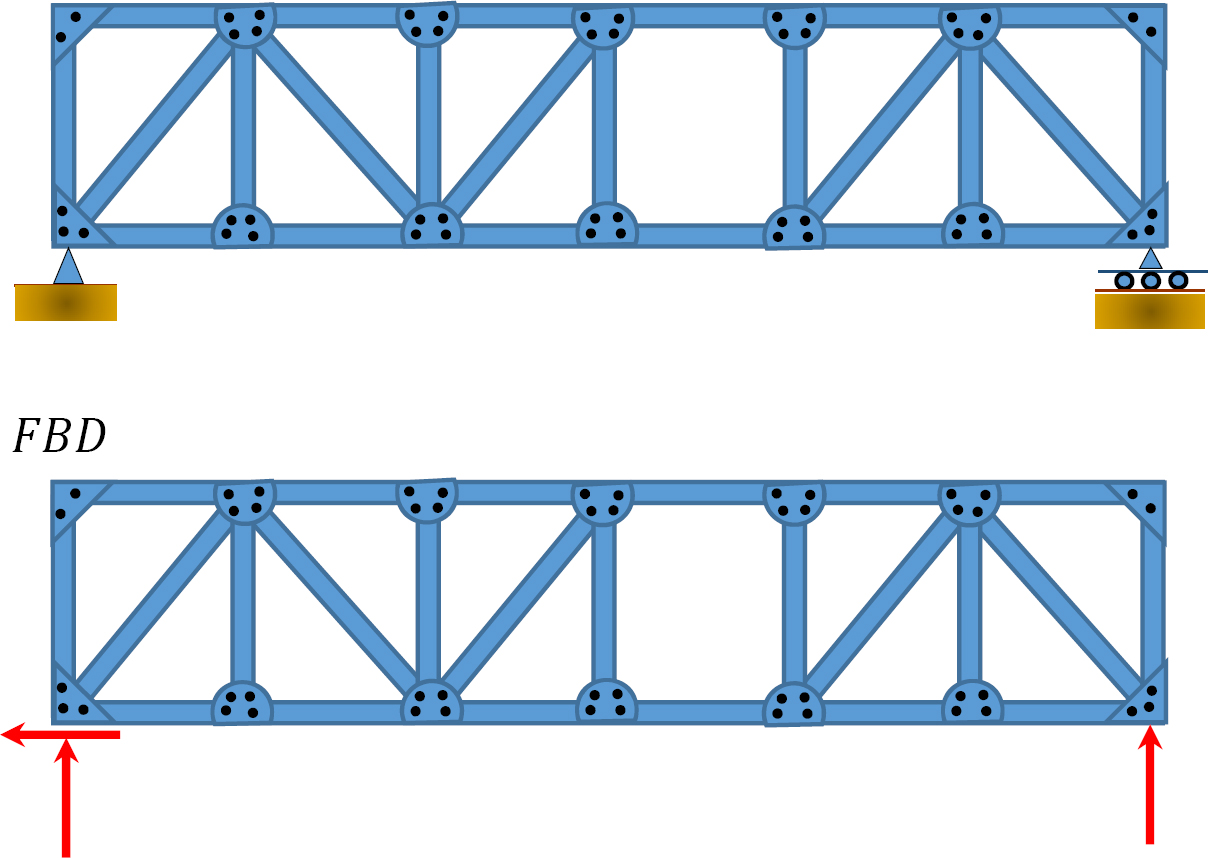 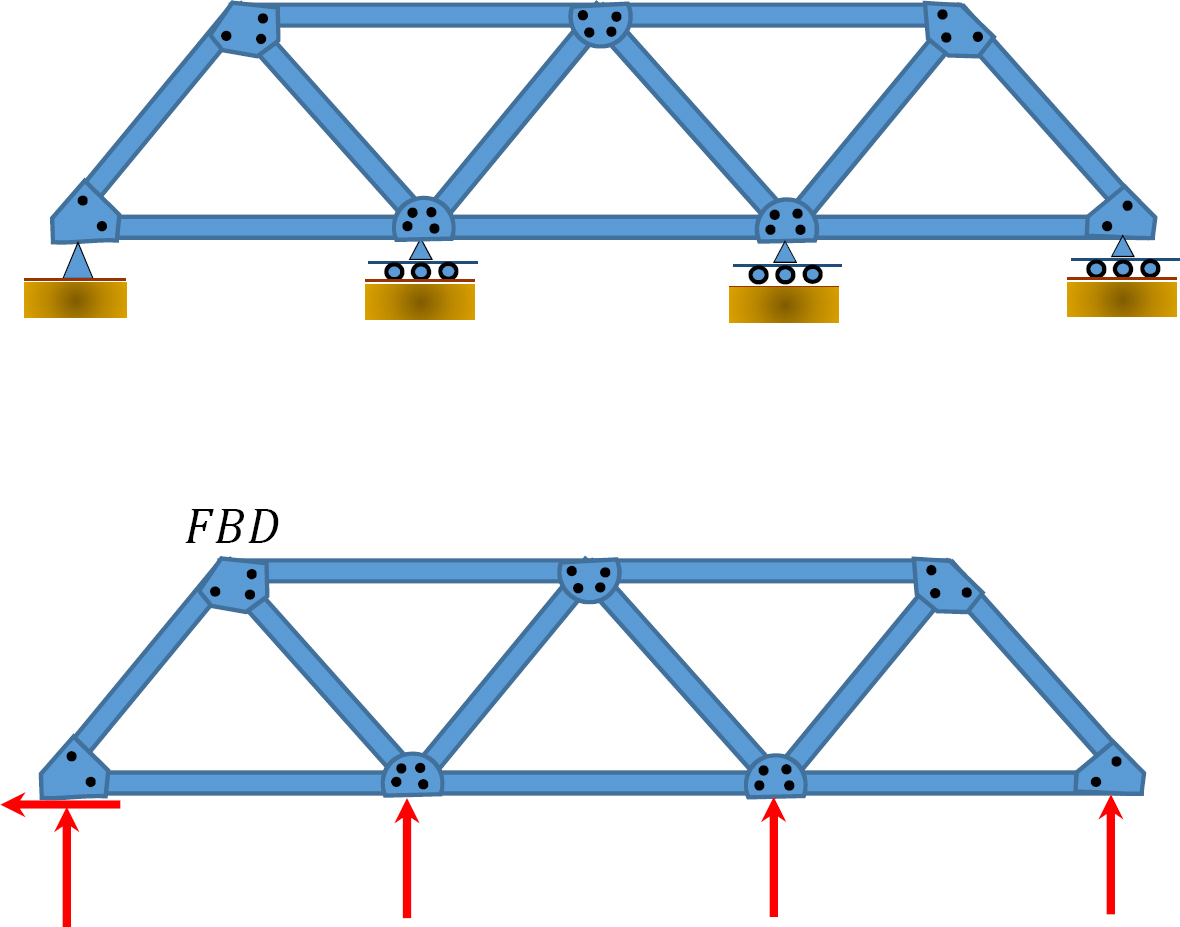 There are several methods of truss analysis, but the two most common are the method of joint and the method of section (or moment).

5.6.2 Analysis of Trusses by Method of Joint

This method is based on the principle that if a structural system constitutes a body in equilibrium, then any joint in that system is also in equilibrium and, thus, can be isolated from the entire system and analyzed using the conditions of equilibrium. The method of joint involves successively isolating each joint in a truss system and determining the axial forces in the members meeting at the joint by applying the equations of equilibrium. The detailed procedure for analysis by this method is stated below.

•Verify the stability and determinacy of the structure. If the truss is stable and determinate, then proceed to the next step.

•Determine the support reactions in the truss.

•Identify the zero-force members in the system. This will immeasurably reduce the computational efforts involved in the analysis.

•Select a joint to analyze. At no instance should there be more than two unknown member forces in the analyzed joint.

•Draw the isolated free-body diagram of the selected joint, and indicate the axial forces in all members meeting at the joint as tensile (i.e. as pulling away from the joint). If this initial assumption is wrong, the determined member axial force will be negative in the analysis, meaning that the member is in compression and not in tension.

•Continue the analysis by proceeding to the next joint with two or fewer unknown member forces.

Using the method of joint, determine the axial force in each member of the truss shown in Figure 5.10a.

Support reactions. By applying the equations of static equilibrium to the free-body diagram shown in Figure 5.10b, the support reactions can be determined as follows: 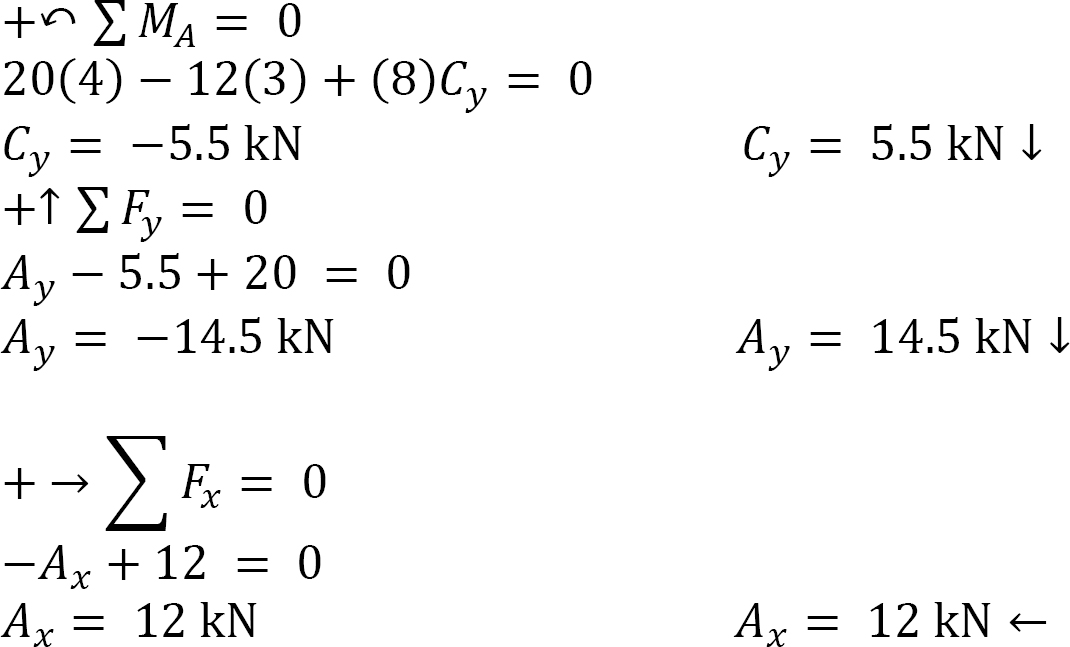 Analysis of joints. The analysis begins with selecting a joint that has two or fewer unknown member forces. The free-body diagram of the truss will show that joints A and B satisfy this requirement. To determine the axial forces in members meeting at joint A, first isolate the joint from the truss and indicate the axial forces of members as FAB and FAD, as shown in Figure 5.10c. The two unknown forces are initially assumed to be tensile (i.e. pulling away from the joint). If this initial assumption is incorrect, the computed values of the axial forces will be negative, signifying compression.

Analysis of joint A.

After completing the analysis of joint A, joint B or D can be analyzed, as there are only two unknown forces.

Analysis of joint B.

1.If noncollinearity exists between two members meeting at a joint that is not subjected to any external force, then the two members are zero force members (see Figure 5.11a).

2.If three members meet at a joint with no external force, and two of the members are collinear, the third member is a zero force member (see Figure 5.11b). 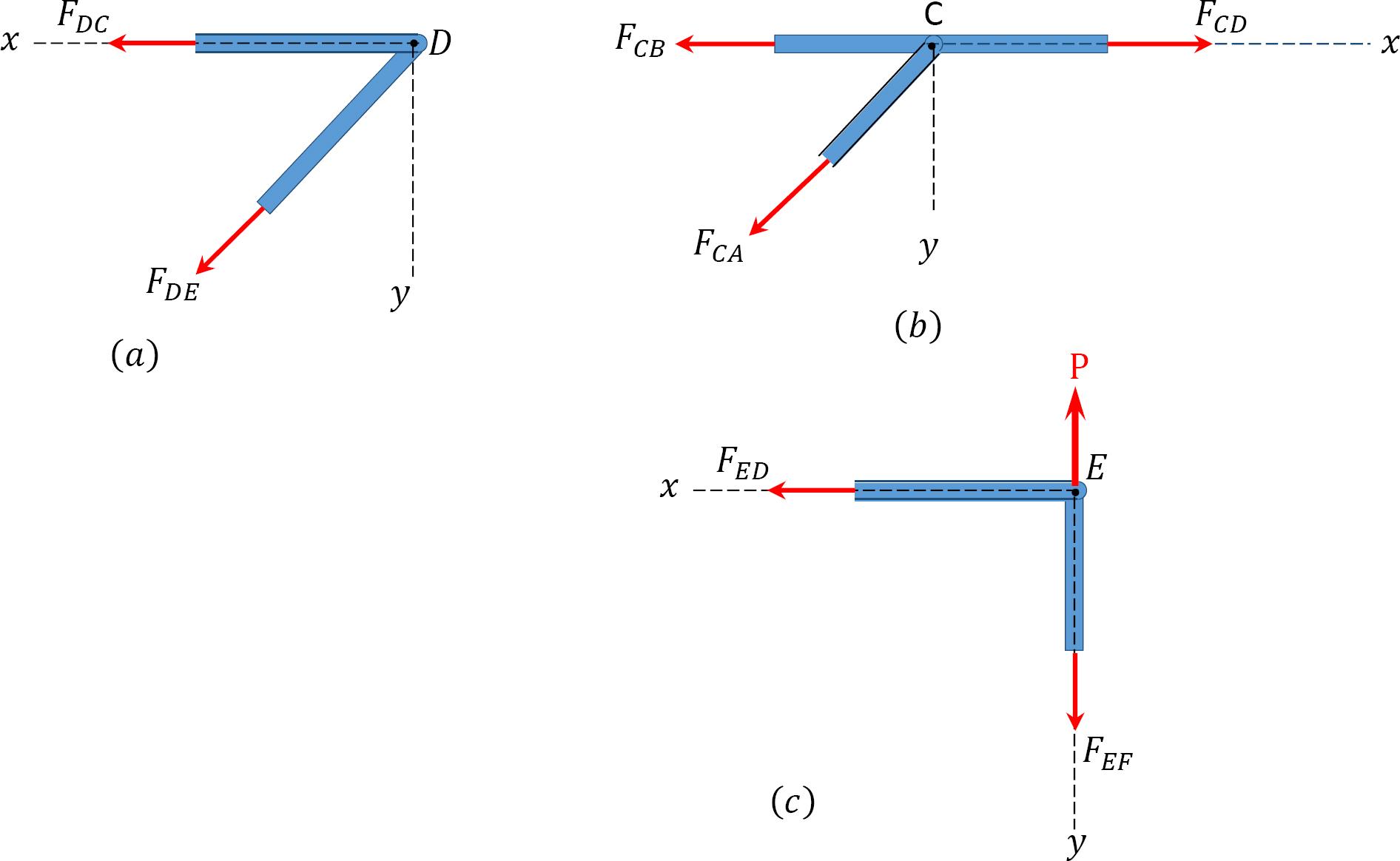 5.6.4 Analysis of Trusses by Method of Section

Sometimes, determining the axial force in specific members of a truss system by the method of joint can be very involving and cumbersome, especially when the system consists of several members. In such instances, using the method of section can be timesaving and, thus, preferable. This method involves passing an imaginary section through the truss so that it divides the system into two parts and cuts through members whose axial forces are desired. Member axial forces are then determined using the conditions of equilibrium. The detailed procedure for analysis by this method is presented below.

Procedure for Analysis of Trusses by Method of Section

•Check the stability and determinacy of the structure. If the truss is stable and determinate, then proceed to the next step.

•Determine the support reactions in the truss.

•Make an imaginary cut through the structure so that it includes the members whose axial forces are desired. The imaginary cut divides the truss into two parts.

•Apply forces to each part of the truss to keep it in equilibrium.

•Select either part of the truss for the determination of member forces.

•Apply the conditions of equilibrium to determine the member axial forces.

Using the method of section, determine the axial forces in members CD, CG, and HG of the truss shown in Figure 5.12a. 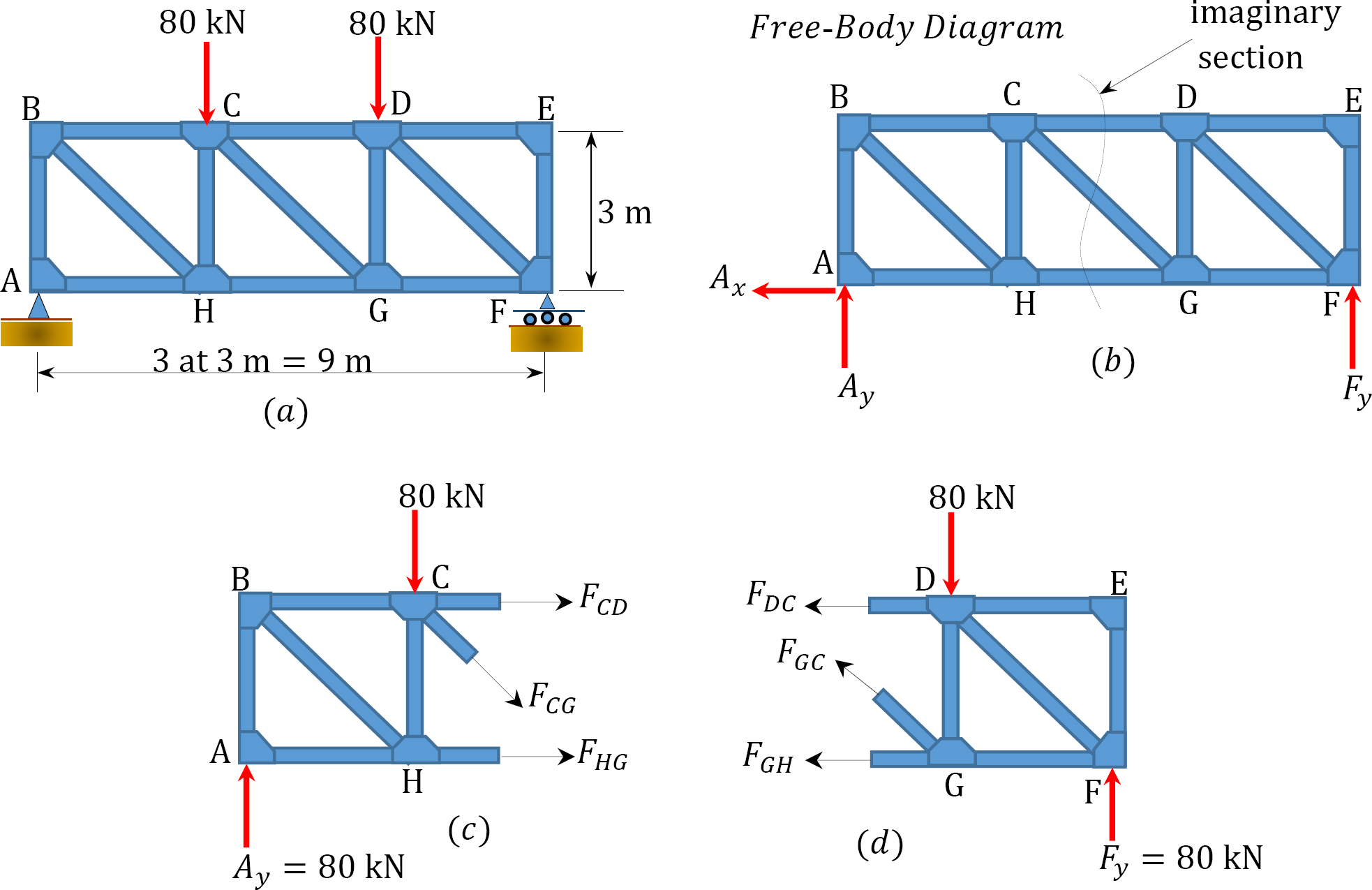 Support reactions. By applying the equations of static equilibrium to the free-body diagram in Figure 5.12b, the support reactions can be determined as follows:

Analysis by method of section. First, an imaginary section is passed through the truss so that it cuts through members CD, CG, and HG and divides the truss into two parts, as shown in Figure 5.12c and Figure 5.12d. Member forces are all indicated as tensile forces (i.e., pulling away from the joint). If this initial assumption is wrong, the calculated member forces will be negative, showing that they are in compression. Either of the two parts can be used for the analysis. The left-hand part will be used for determining the member forces in this example. By applying the equation of equilibrium to the left-hand segment of the truss, the axial forces in members can be determined as follows:

Internal forces in plane trusses: Trusses are structural systems that consist of straight and slender members connected at their ends. The assumptions in the analysis of plane trusses include the following:

1.Members of trusses are connected at their ends by frictionless pins.

2.Members are straight and are subjected to axial forces.

3.Members’ deformations are small and negligible.

4.Loads in trusses are only applied at their joints.

The formulation of stability and determinacy in trusses is as follows:

Method of section: This method entails passing an imaginary section through the truss to divide it into two sections. The member forces are determined by considering the equilibrium of the part of the truss on either side of the section. This method is advantageous when the axial forces in specific members are required in a truss with several members. 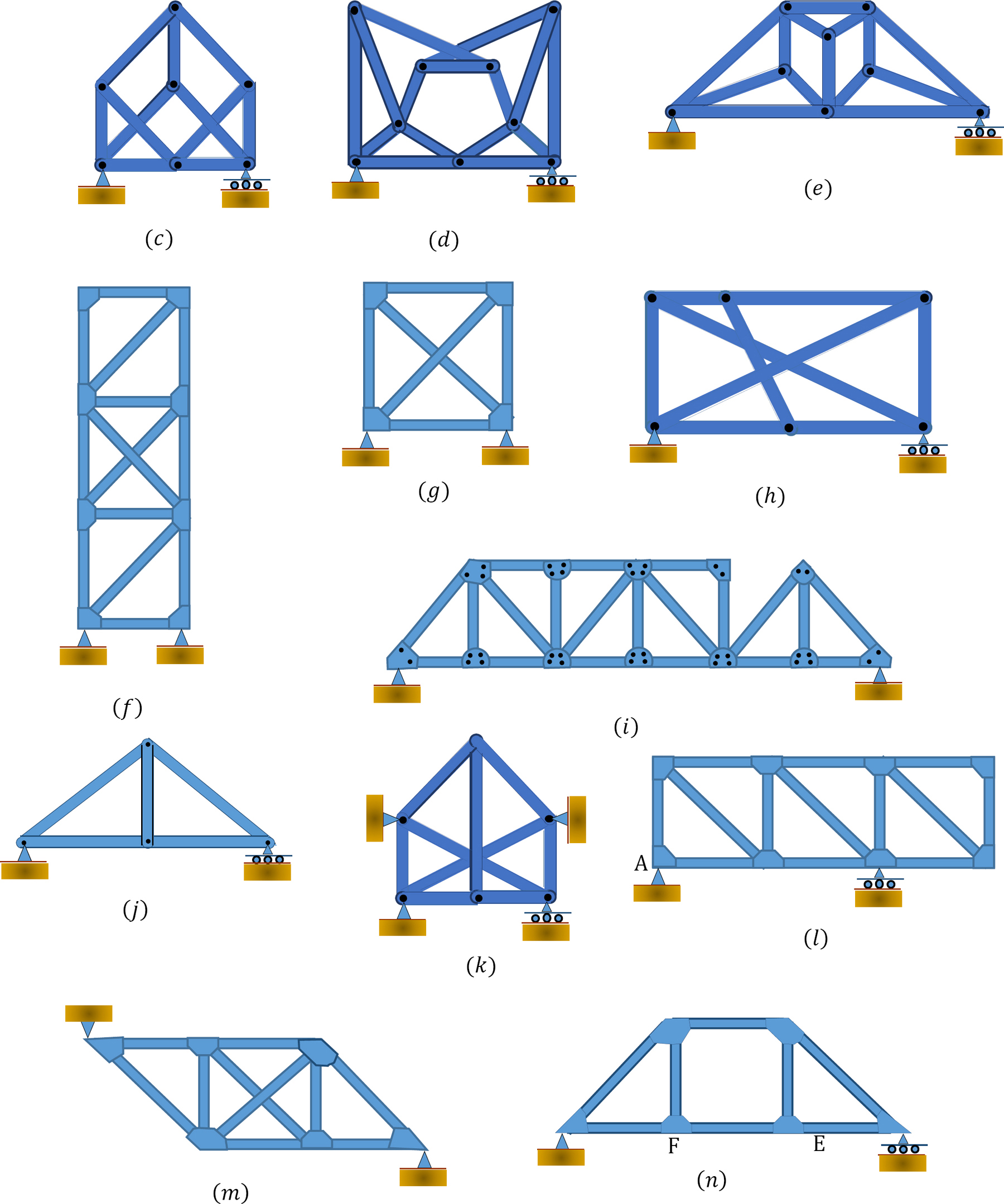 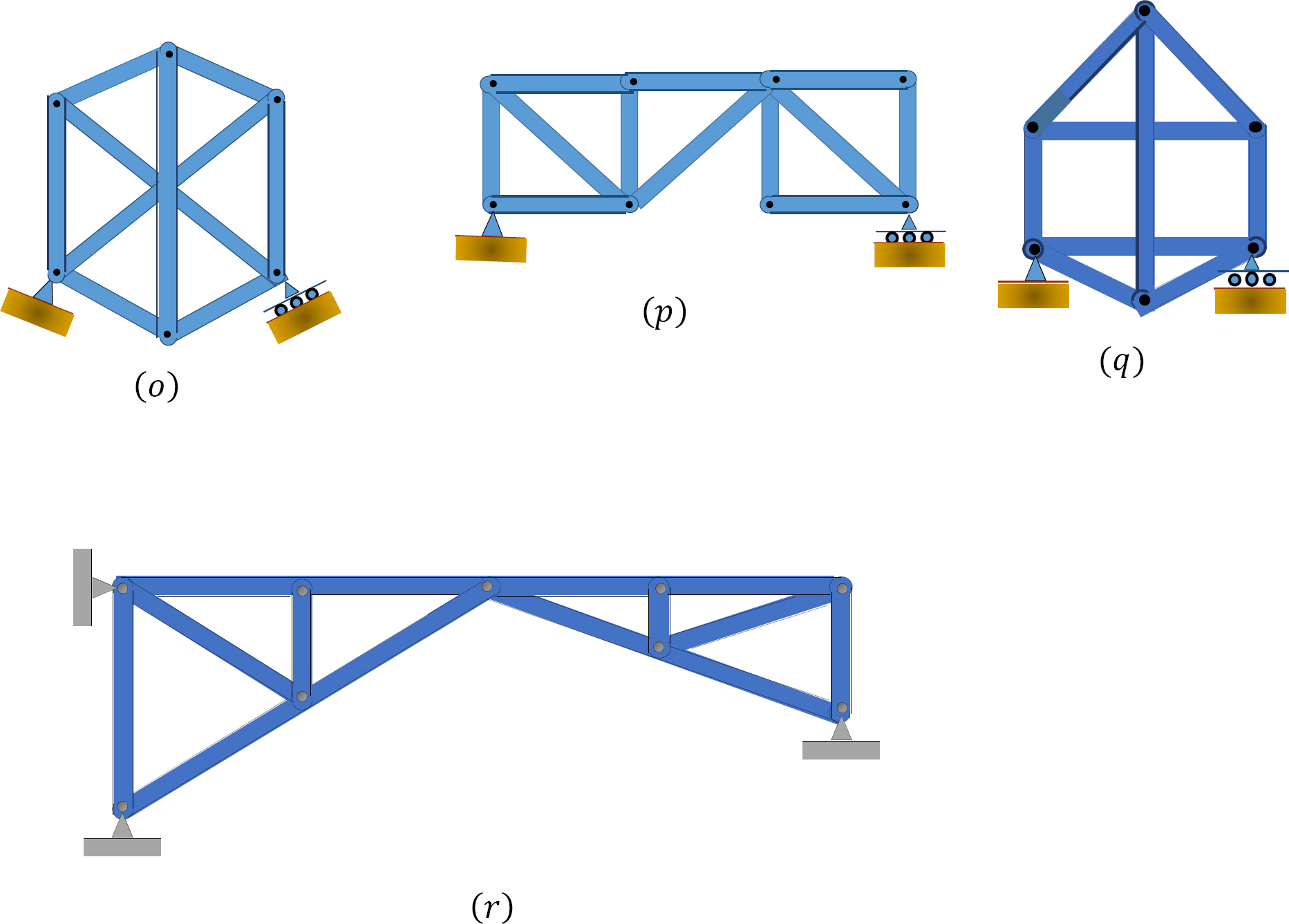 5.2 Determine the force in each member of the trusses shown in Figure P5.2 through Figure P5.12 using the method of joint. 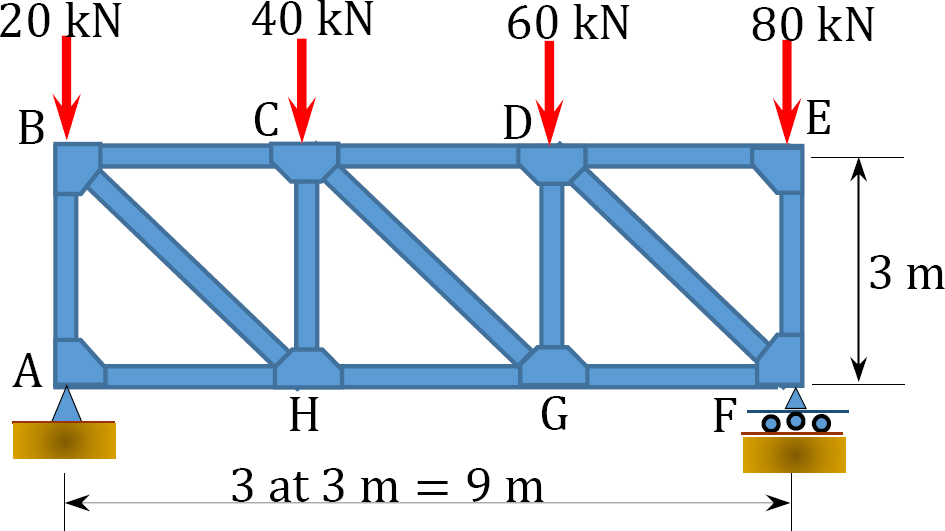 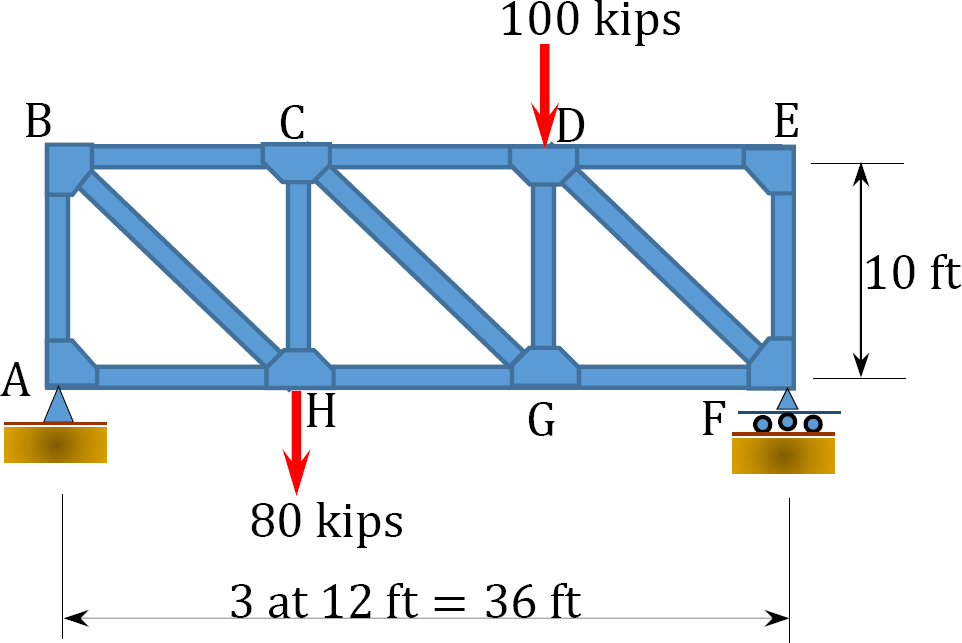 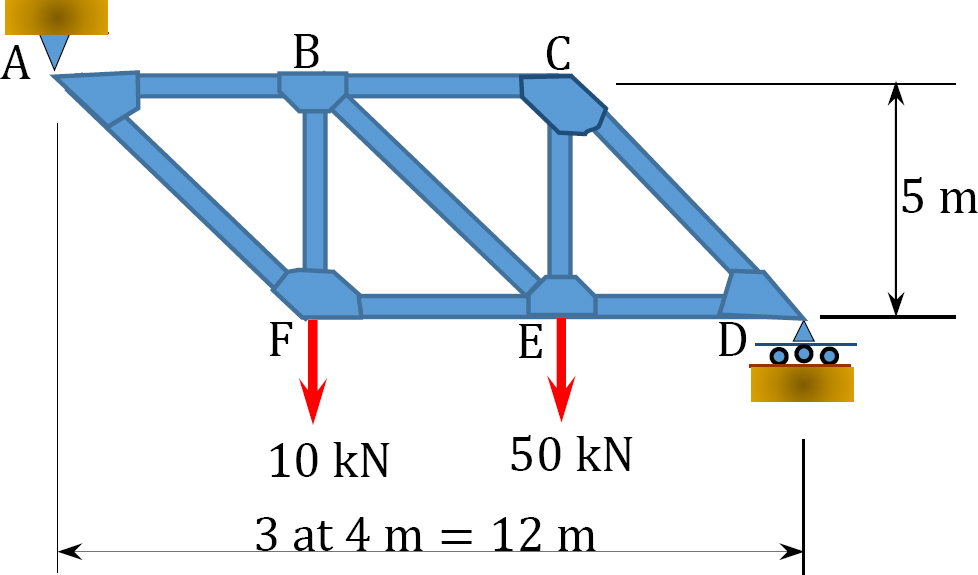 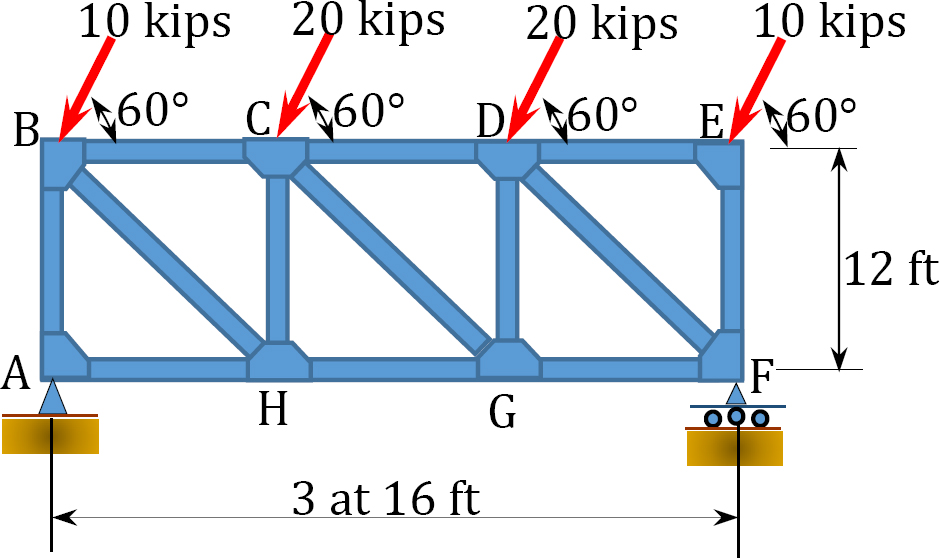 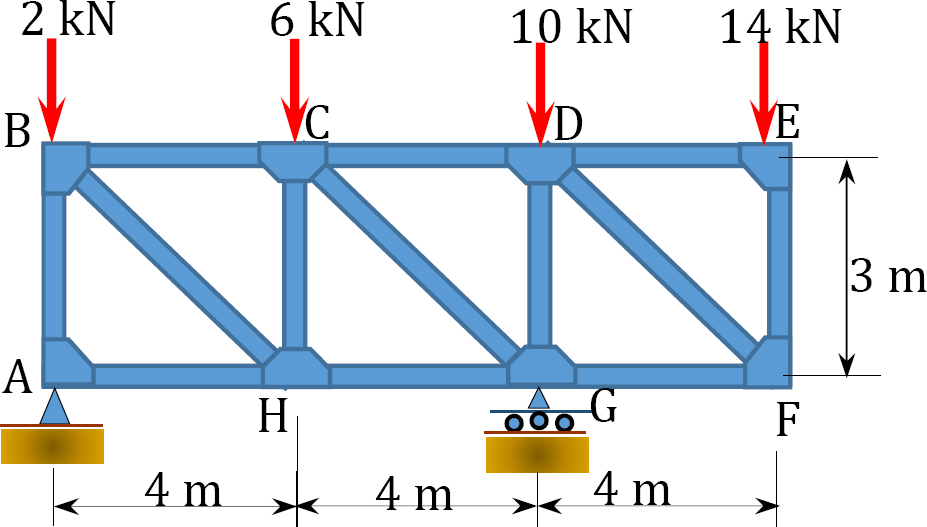 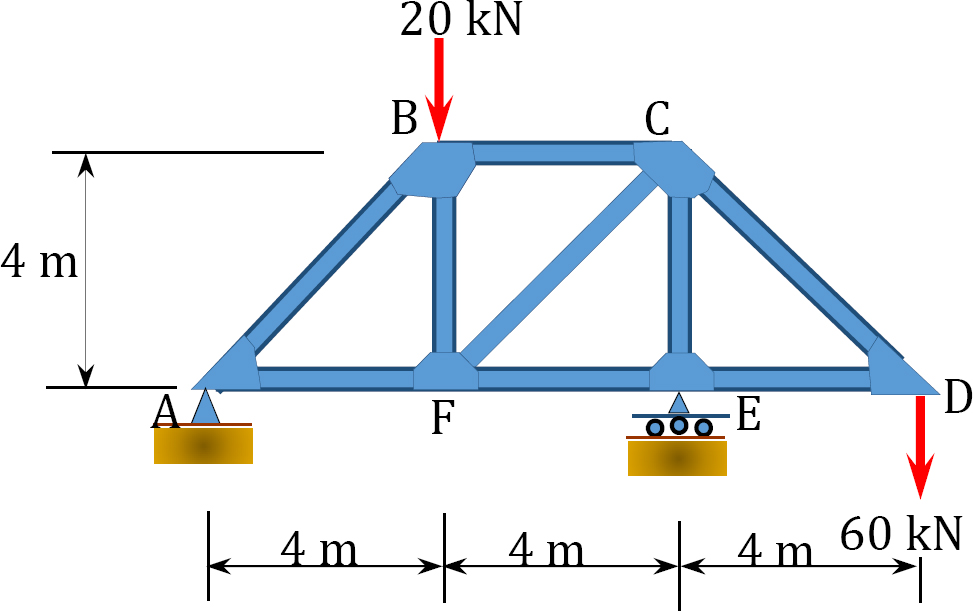 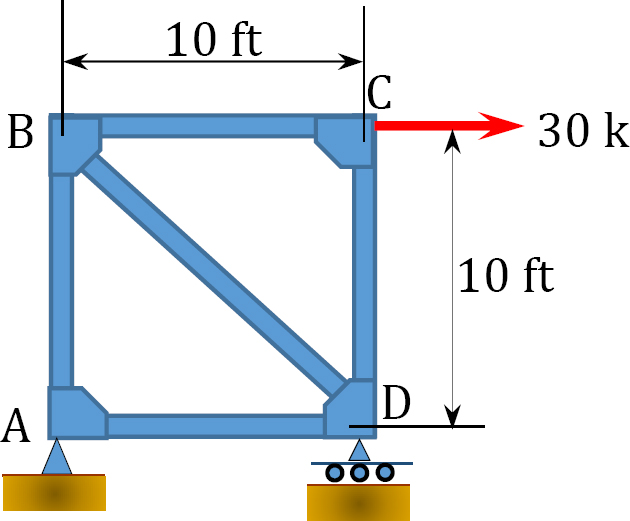 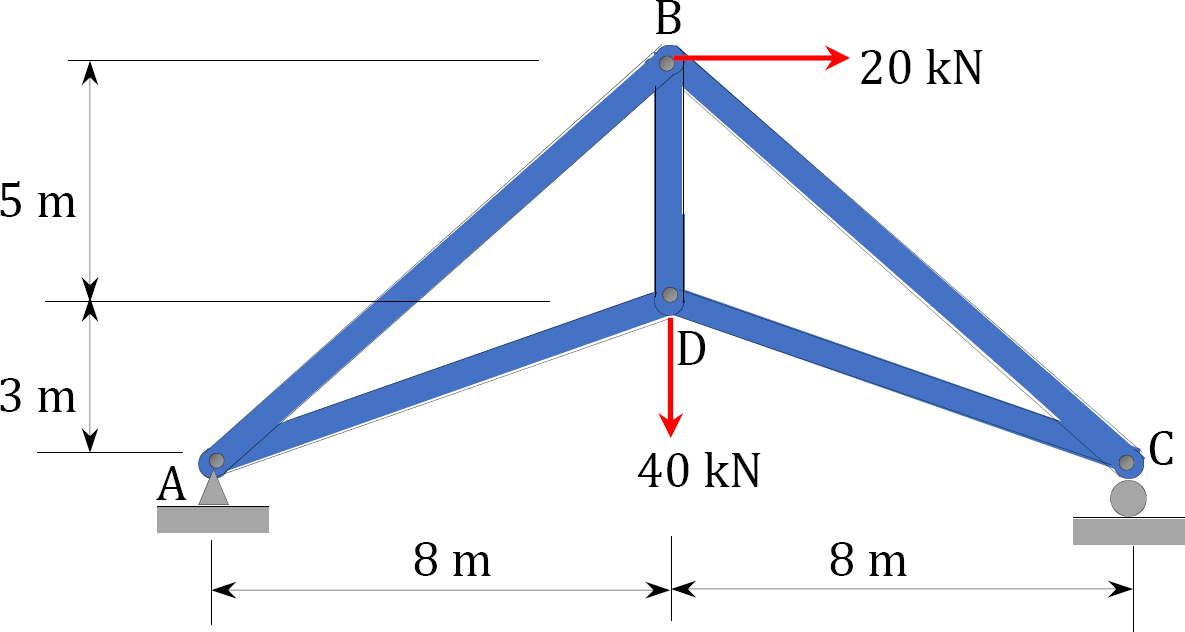 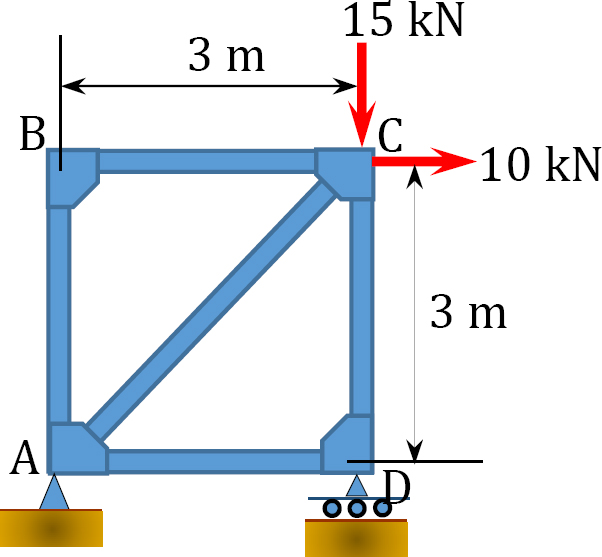 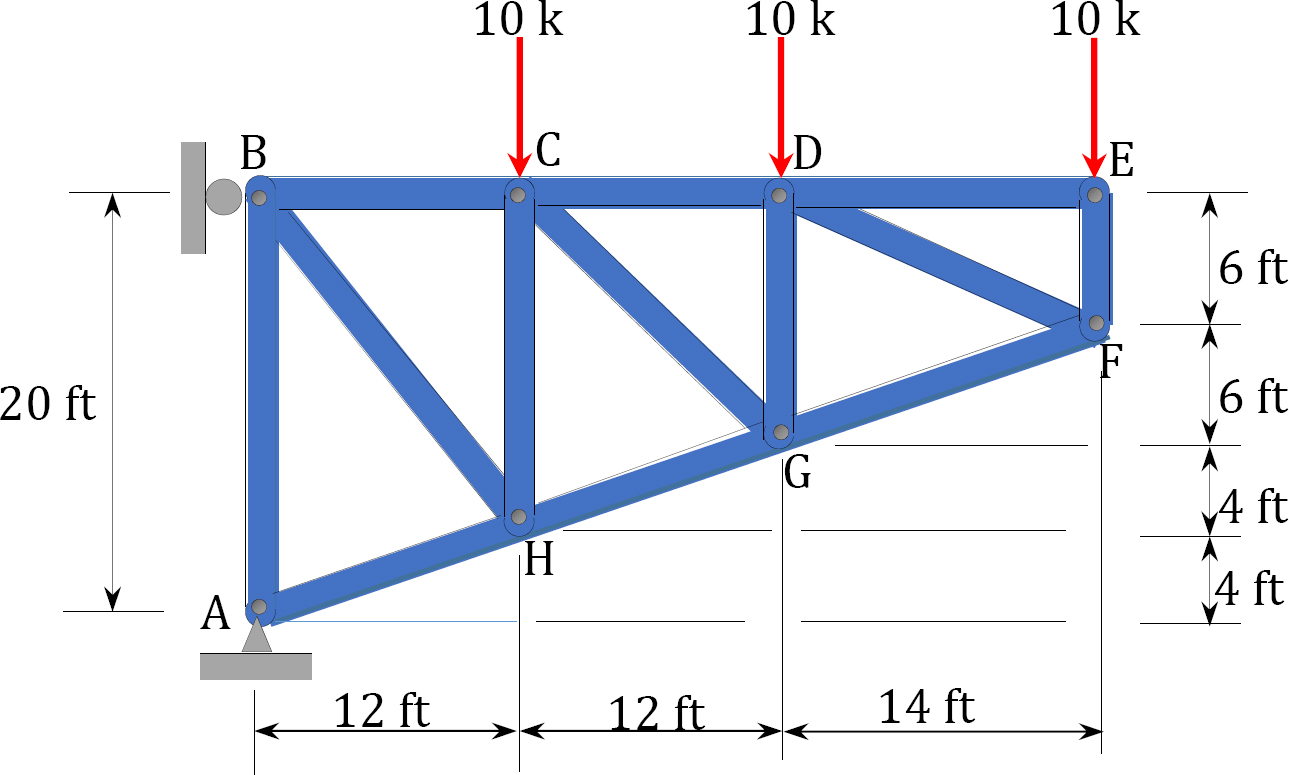 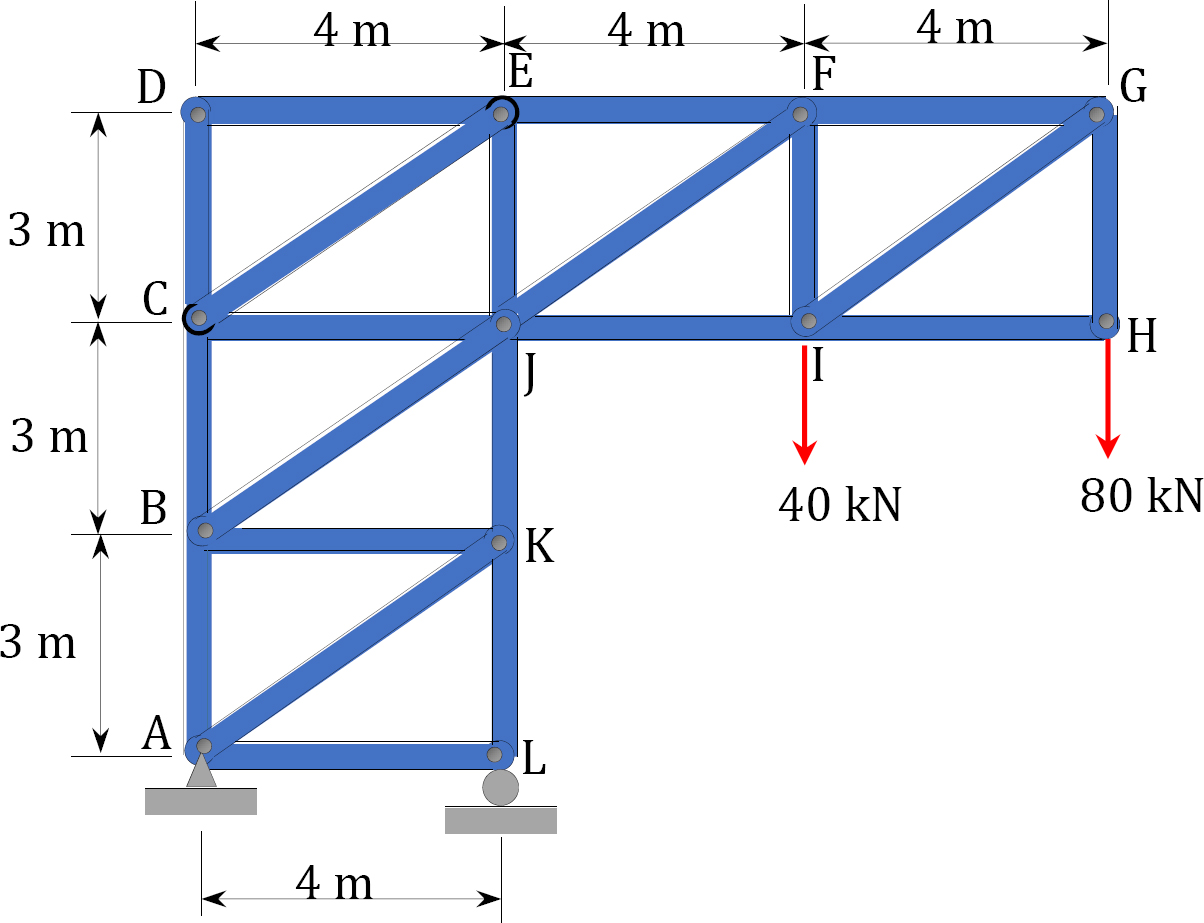 5.3 Using the method of section, determine the forces in the members marked X of the trusses shown in Figure P5.13 through Figure P5.19. 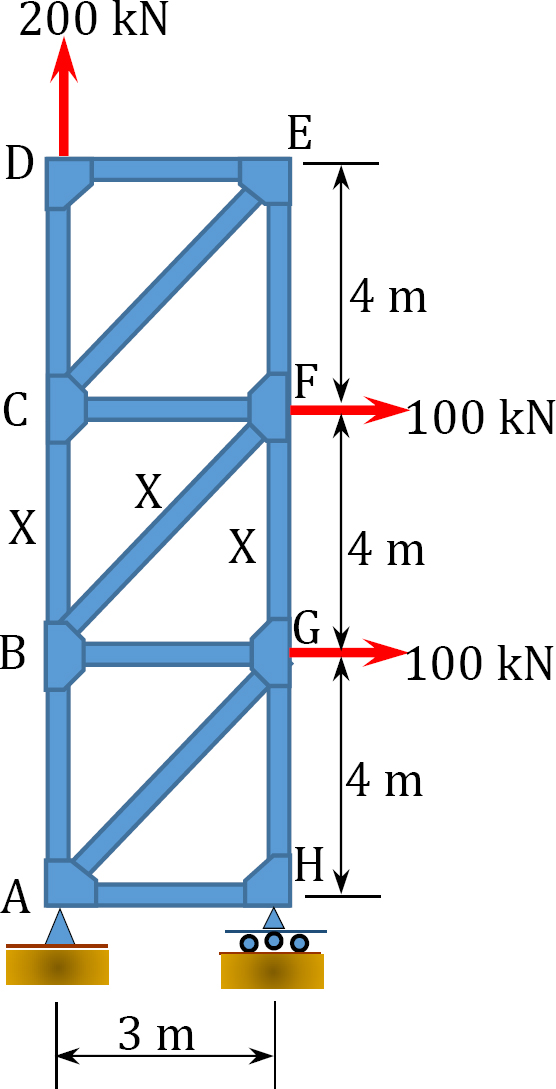 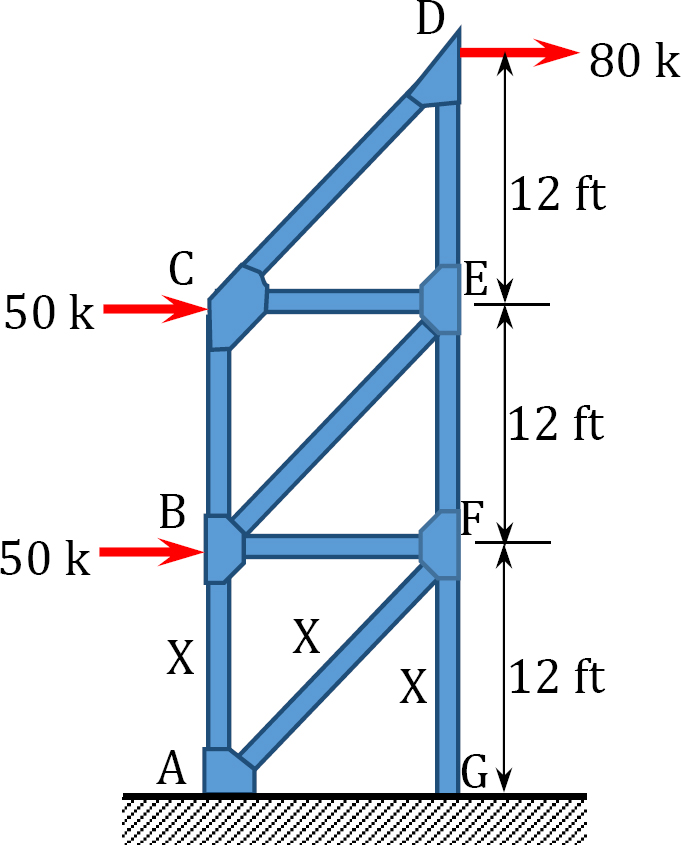 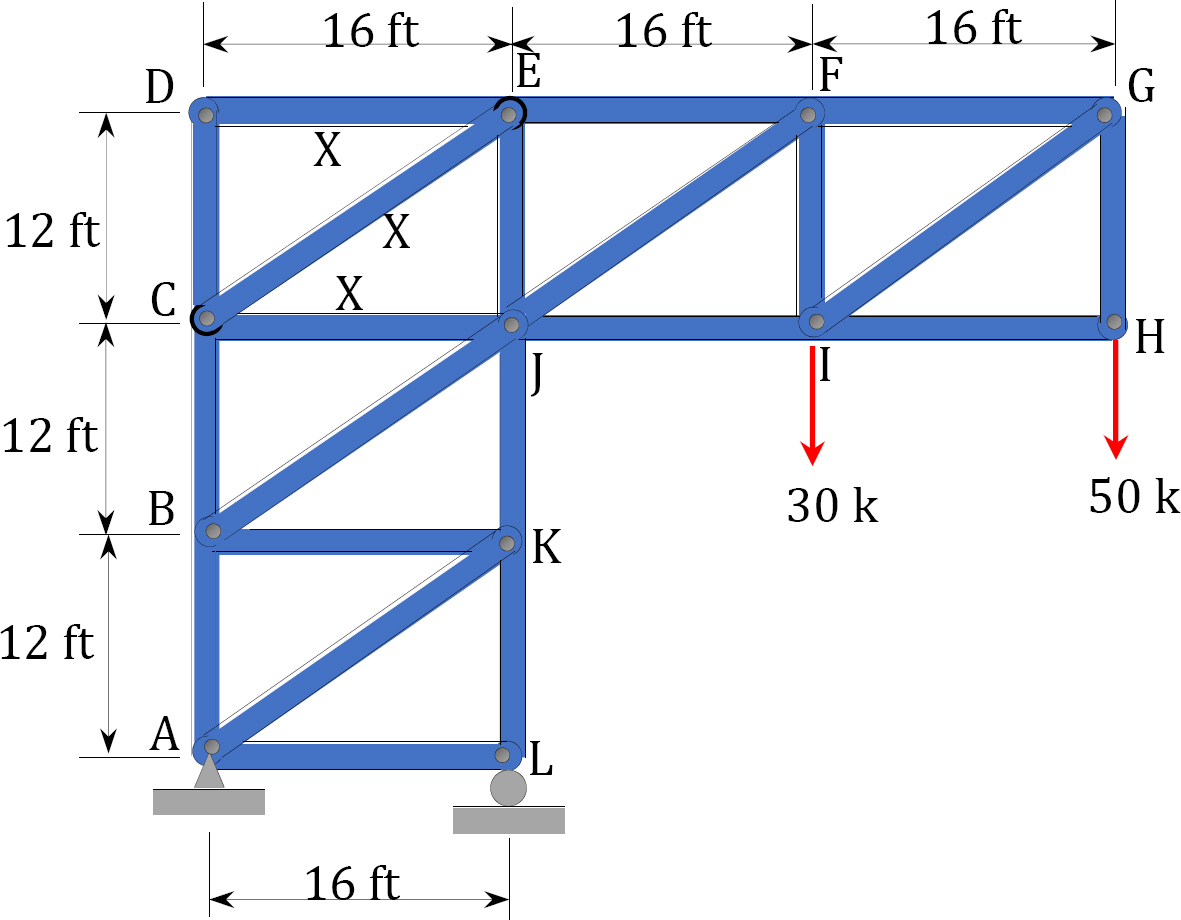