Anthracite (hard coal) is a coal with a high percentage of fixed (nonvolatilized) carbon; true anthracite is 91 to 98 percent carbon. High carbon content gives the coal its peculiar characteristics. It is jet black with a high luster, hard, and does not burn readily. Once ignited, it emits a short blue flame and gives off an intense heat with little smoke.

Many laymen confuse semianthracite with hard coal. Semianthracite is 85 to 90 percent carbon, is softer and less lustrous than anthracite. When lit it burns with a yellow flame, but the flame quickly dies and the coal then assumes anthracite’s heating characteristics.1 Since the two coal types are often equated and both are found in the same region, the term anthracite as used in this book includes coal that is 85 to 98 percent carbon.

All of America’s usable anthracite deposits lie in Pennsylvania within a 1,400-square-mile area, of which only 439 square miles contain coal. Three rivers—the Susquehanna, the Lehigh, and the Schuylkill—drain the region, while a double ring of mountains surrounds the coal measures.2

The story of anthracite antedates historical time; it begins in the Pennsylvania Period3 of the Paleozoic Era. During the Pennsylvania Period much of eastern North America was a broad and level lowland and subject to periodic submergences. When above sea level, the terrain’s lowness afforded poor drainage, thus creating swamps of continental size. Encouraged by a universally mild and wet climate, thick forests of lipodenderons, sigiliaria, and calamites thrived in the swampy areas. Foliage, twigs, and dead trunks fell into the murky water and underwent a biochemical process resulting in peat.

The weight of the peat depressed the flexible crust of the earth, causing the peat to be covered by sediment washed down from higher ground. Submergence continued until the subsidence either stopped or proceeded so slowly that sediments could again build up continental conditions. Cyclical conditions of uplift and submergence built a distinct geological structure—the cyclothem—which would give the coal measures a unique feature. Although not all need be present, the cyclothem usually contains ten layers. Layers one to three represent the preswamp era of uplift, and consist of sandstone, shale, and limestone. Underlay, believed by many to be the swamp’s soil, composes the fourth layer, while coal (peat) is found in the fifth. Shale, representing continental sediments, overlies the coal, and marine deposits compose layers seven to ten.

While locked into position by the cyclothem, the peat underwent a dynamochemical change which completed its metamorphism. Pressure from the overlying strata drove off volatile matter and water, thus transforming peat into lignite, and, as the pressure increased, lignite into bituminous coal. The final conversion required more pressure than that provided by the weight of overlying sediment. Indeed, only a crustal movement (diastrophism) could supply the necessary pressure.

The diastrophism occurred during the Permian Period of the Paleozoic Era. At about the middle of the Permian Period, Appalachia (now the eastern United States) was thrust westward against the Appalachian geosyncline. Moving from the southeast, the compressive force was so great that it folded strata, causing the surface area to shorten; the distance between present-day Philadelphia and Altoona shrank 100 miles. Rock strata underwent the greatest folding in the eastern United States, with the deformations gradually ceasing toward the west. The area experienced six subsequent uplifts.

Fig. 1   The Division of Coal Beds by Erosion

As the folding receded, there was only a partial conversion to anthracite. Semianthracite is found in the Shamokin area, where distance combined with faults to reduce the pressure. Near Scranton the reduced force could not bend the coal beds’ dense underlying strata and again we find semianthracite. One may trace the decreasing force waves by noting the degradation of the coal’s rank (anthracite to semianthracite to semibituminous to bituminous) as he travels west through Pennsylvania.

The gradual transition from anthracite to bituminous, plus the approximate identity of seams, suggests that the two deposits originally belonged to the same field. Erosion divided the fields (see Fig. 1). Water washed away most of the mountains created by the Permian thrust and subsequent uplifts permitted increased denudation.

Erosion also divided the anthracite field into four basins.4 The northern field, 176 square miles, is crescent-shaped and extends from Forest City on the Lackawanna to Hartville near the Susquehanna. The 38-square-mile eastern middle basin is a collection of small parallel troughs situated on a plateau bordered by Spring and Green Mountains, with Hazleton its principal city. Locust Mountain partitions the 95-square-mile western middle basin into southern and northern sections. The southern section extends from Locust Gap to Ashland, while the northern begins at Shamokin and ends at the headwaters of the Catawissa. Shaped like a fish, the southern basin covers 149 square miles in Carbon, Schuylkill, and Dauphin Counties.

Fig. 2   Coal Seam Folded Back Over Its North Dip 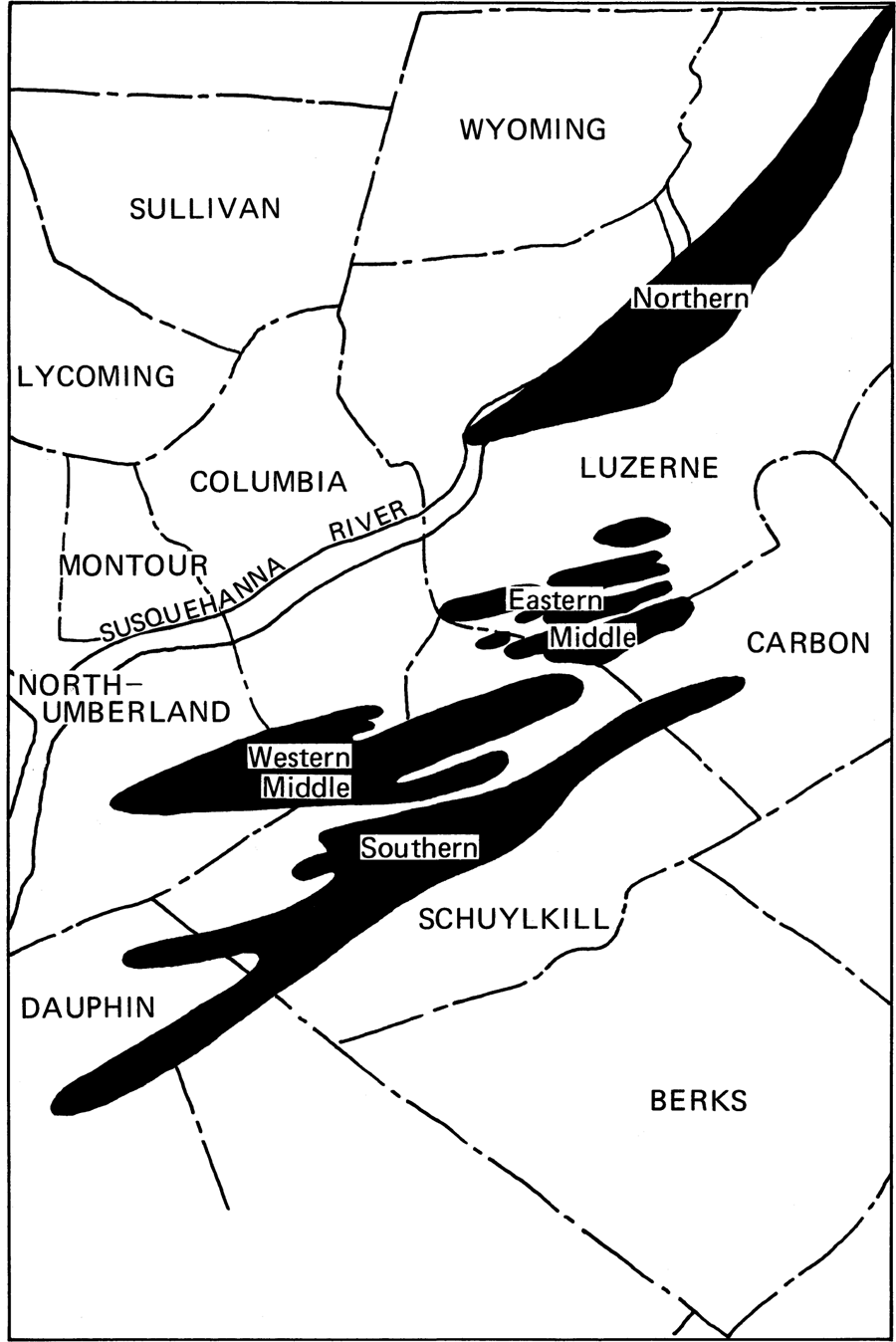 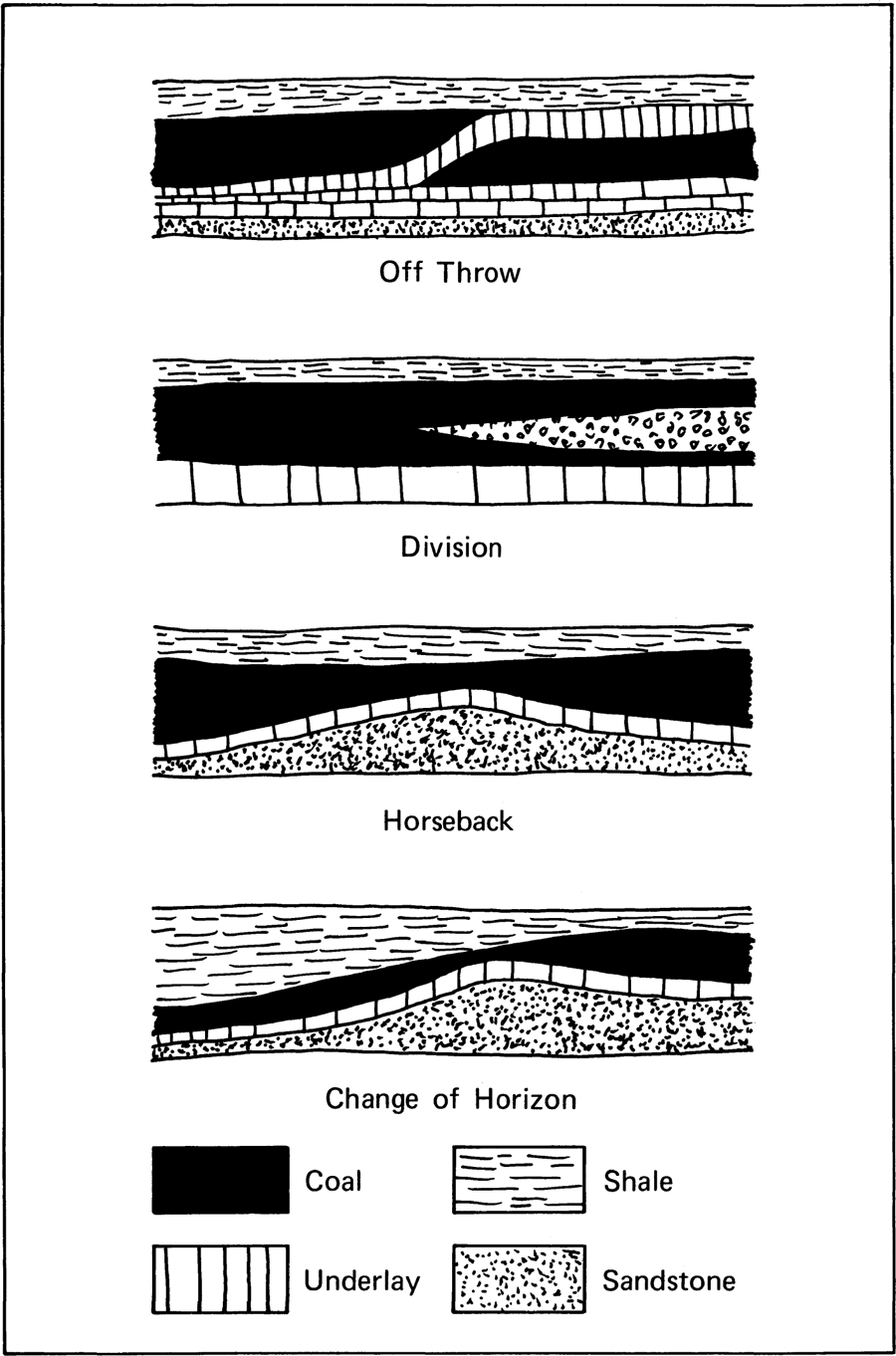 Geological differences between the northern and the remainder of the basins give the former a distinct identity. During the Pleistocene Epoch of the Cenozoic Era a glacier covered much of the northern basin. Drift buried the valley gouged out by glacial activity. The Susquehanna flows over the buried valley, and its water-clogged material, resembling quicksand, poses a threat to the workmen below.5 As already noted, the northern basin experienced less folding; therefore its beds are in a more or less horizontal position, whereas the seams in the other basins incline over 90 degrees from the horizon (see Fig. 2). The dense underlying strata which retarded folding in the northern basin also proved less susceptible to faulting, but the remaining basins have numerous faults.

The basins’ topography reflects their differences in structure. The northern basin lies in a broad river valley broken by gently rolling ridges. The eastern middle resides on a high plateau, and the ridges separating the troughs are more pronounced than those in the northern basin. Both the western middle and southern basins occupy narrow valleys with ridges approximating the surrounding mountains’ height.

Soil fertility caused the regrouping of the three topographically distinct areas into two regions. The Wyoming Valley, under which lies the northern basin, contained a rich soil that attracted both Connecticut Yankees and Pennsylvanians during the colonial period. In fact, the valley once enjoyed a reputation for being the nation’s “garden spot.” A sterile soil, however, covers the remaining three basins. Barren soil and inaccessibility discouraged would-be settlers; even the Indians shunned the area, which they called Towamensing—the wilderness. White explorers agreed: while traveling through the region in 1742 Count von Zinzendorf dubbed it “Saint Anthony’s Wilderness,” a name it would carry until the discovery of coal changed it forever.6