The present study is based on ninety oral history interviews, including sixty-four conducted by the author. Of the twenty-nine others, nineteen were done by scholars associated with the Southern Oral History Program at the University of North Carolina. The core interviews were fifty-five life histories of industrial workers employed in Durham between 1900 and 1950 (see Table 27). Other interviews were conducted with agricultural workers, teachers, manufacturers, domestic workers, and other residents of Durham in the period between 1880 and 1940. The interviews posed a series of questions about family background, work experience, involvement in union or other community activities, family relationships, and work-related contacts with coworkers and employers. There was no direct attempt to elicit attitudes toward race, gender, or class, and no attempt to force the informant to follow the outline of topics drawn up by the interviewer. Among other interviews are more than two hundred oral histories contained in the North Carolina Federal Writers’ Project collection, excerpts from surveys conducted by Emma Duke of the U.S. Children’s Bureau in 1918, by Margaret Hagood among tenant farm women in the 1930s, by Orie Latham Hatcher among young employed women in Durham in the mid-1920s, and by investigators under Charles S. Johnson, who interviewed tobacco workers in Durham in 1935.

Although oral history is an irreplaceable tool in a study intended to discover the ways in which women experience and perceive their lives, it has certain limitations. The gender, race, and class of the interviewer shape the informant’s responses in ways difficult to measure. For example, black informants were far more likely to express anger about racial injustice to black interviewers. White informants, however, displayed less hesitation in discussing their racial views. The interviewer also sensed that the format of the interviews, which involved one or two formal sessions, was less productive with women than men. Studies by anthropologists and sociologists indicate that women are more likely to reveal their views in intimate settings, whereas men are more accustomed to public presentation of their opinions. Each interview, moreover, involved an encounter between a historian and an industrial worker, two people of vastly different backgrounds. Despite the intentions of the interviewer, it was harder to reconstruct patterns of daily life in the household and domestic labor than it was to retrieve memories of the public workplace. Moreover, the data were shaped by all these factors because the informants were conscious of speaking to a particular audience. There is no way to estimate how the result might have differed given another approach, another interviewer, or another setting.

†These figures include 5 workers who moved between textile and tobacco occupations.

‡These figures include 7 people also in the tobacco and textile worker groups.

Some of the informants and interviewers who contributed to this study include the following: 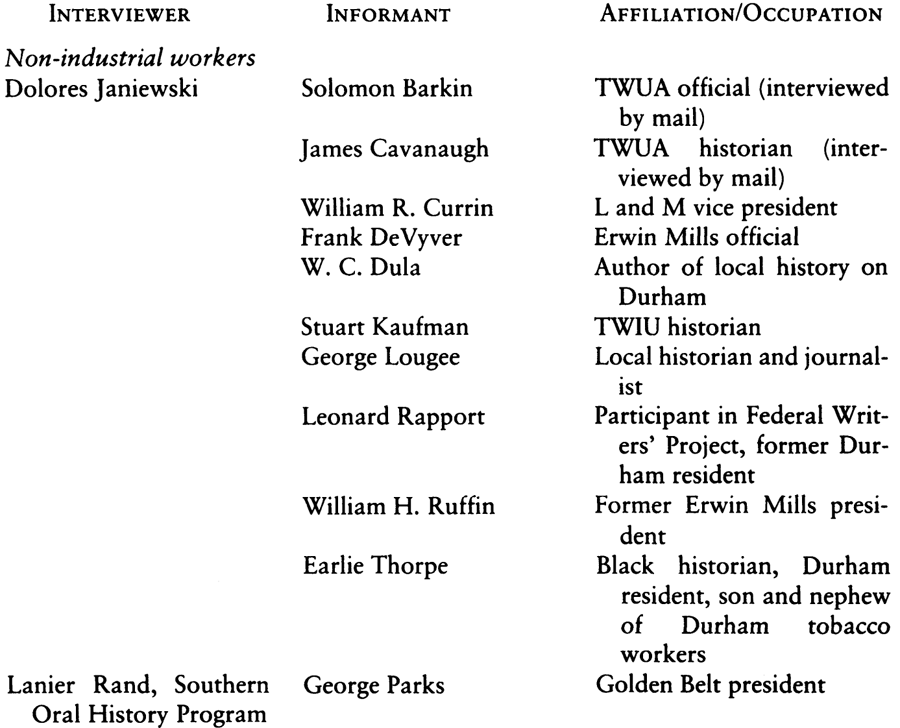 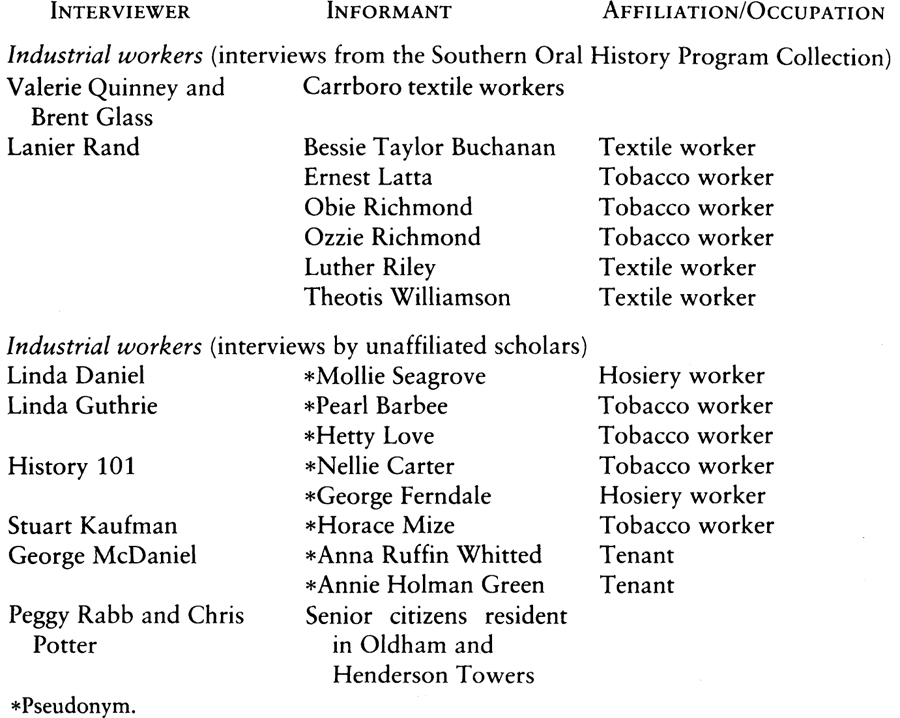 The quantitative analysis presented in this study was based on samples taken from the 1880 and 1900 manuscript census at the National Archives for Orange/Durham, Person, and Granville Counties. When the sampling was underway, the 1910 manuscript census was not yet open to researchers. The counties sampled were selected as typical of the areas from which women migrated into Durham. The urban samples represent one-fifth of all the households containing a female aged twelve and over in the city of Durham and its surrounding suburbs for those census years selected. The rural samples represent a one-fiftieth sample of rural households containing a female aged twelve and over in rural Orange/Durham, Person, and Granville Counties. Orange County, from which Durham was created in 1881, was the unit of analysis in the 1880 sample. The sampling procedure involved taking every fifth or fiftieth household that met the criteria without random sampling because there was little risk of any recurrent pattern in this data base. In addition, a smaller, one-eighth sample was taken of suburban households containing textile, tobacco, or hosiery workers that also included a female aged twelve and over. Thus, the essential basis for selecting the households was the presence of a woman old enough to be working or bearing and caring for children in the chosen household.

After selection, the sample households and the members of the households were organized in a series of files and coded in a system developed by the author. Only the simpler statistical programs were run to analyze the data because its categorical nature did not justify elaborate programs such as regression analysis. Cross tabulations and frequency distributions were the major statistical tests used to explore women’s working experiences in the rural Piedmont and in Durham. These were used to process 832 total housholds, including 262 rural households and 570 urban households for the years 1880 and 1900.

Other sources for the quantitative analysis included the studies undertaken by Charles S. Johnson for the National Recovery Administration, the investigations completed in 1907 for the U.S. Senate Report on the condition of working women and children, and published studies done by agricultural economists.