As an undergraduate English major, I was always looking for free books. Professors and graduate students at the University of California, Riverside filled bookshelves in the halls of the humanities building with outdated or unwanted books and journal issues. One of the titles that I noticed was Eric Donald Hirsch’s Cultural Literacy: What Every American Needs to Know (1987). I was interested in both culture and literacy, and indeed, I was and still am an American. Therefore, I started looking through it to find out what I “needed to know.” Inside, I found an appendix titled “The List,” which included more than sixty pages of dates, names, subjects, and places, organized in two alphabetical columns. In order to be a “literate American,” Hirsch thought I needed to know these things. These things included “the auricle” (a fancy word for “your ear”), “the cupola” (a rounded dome forming a ceiling), and a song titled “Home Sweet Home,” which I assume is Henry Bishop’s adaptation from John Howard Payne’s 1823 American opera and not Mötley Crüe’s 1985 glam metal song by the same title.

I felt offended. Who was this person to tell me what I “needed to know”? Who decides what information is important and what information is not? I know what Hirsch was trying to do—prepare people for the types of topics and questions that might come up in academic settings such as universities. However, I never heard anyone refer to any of these three things in all of my years of schooling, from my community college through my doctoral program. I did, however, hear people talk about Mötley Crüe, Hamilton, Clint Eastwood, Slumdog Millionaire, and many other popular culture references. Some of them I knew, but others I did not. It was these moments where I felt excluded that impacted me the most. Of course, some professors referred to obscure, archaic cultural artifacts, and they were shocked when their students were unfamiliar with that piece of high art. But I wasn’t alone; many nineteen-year-old students in Southern California didn’t know who André Breton was or what a theater proscenium is.

With this in mind, I have prepared lists of cultural references that I think will be much more useful for your actual college experience. Many of your professors will be between the ages of thirty and sixty. Some will be as young as twenty-two or twenty-three (master’s or doctoral students who teach as graduate instructors or teaching assistants), and some will be in their seventies and above. They will all make references to the characters, histories, and symbols that mean the most to them, and they will hope that you understand what they are talking about. Great professors are often very aware of current events and trends as well because they are continually learning and seeking out new information. Therefore, the lists below primarily cover United States cultural references from the last twenty years. Every day on your commute to school on the bus/train or in your free time between classes, go on the internet and search for one or two of these figures. There is a good chance your university library will have audio and/or video recordings by these figures if you would like to check out their work. While you read about, listen to, or watch their performances, take some notes on this open textbook using a PDF program or in a physical journal.

I have included artists and works that have won awards simply because of the fame and notoriety that comes with winning awards. I am not saying these artists and works are necessarily any better than others. They are simply more talked about and more recognizable because of their award-winning status. I am also aware that many artists and works from historically underrepresented groups and backgrounds are correspondingly underrepresented here. Therefore, I have tried to include lists of great films by African American, Asian American, and Hispanic and Latinx American directors.

Because people will often refer to these people and things by full name (such as “Philip Seymour Hoffman” instead of just “Hoffman”), these lists are organized alphabetically by first name.

Daughters of the Dust (1991), directed by Julie Dash

Devil in a Blue Dress (1995), directed by Carl Franklin

The Blood of Jesus (1941), directed by Spencer Williams

The Spook Who Sat by the Door (1973), directed by Ivan Dixon

Their Eyes Were Watching God (2005), directed by Darnell Martin

To Sleep with Anger (1990), directed by Charles Burnett

When the Levees Broke (2006), directed by Spike Lee

This list was published in the online version of the Los Angeles Times on October 4, 2019, by Brian Hu. More than twenty Asian American critics and curators chose these films directed by Asian Americans, ranging from release dates in 2000 through 2019.

Journey from the Fall (2006), directed by Ham Tran

The Fast and the Furious: Tokyo Drift (2006), directed by Justin Lin

Before 2020, this category of the Academy Awards was called “Best Foreign Language Film.” These films are produced outside the United States and use mostly non-English dialogue. 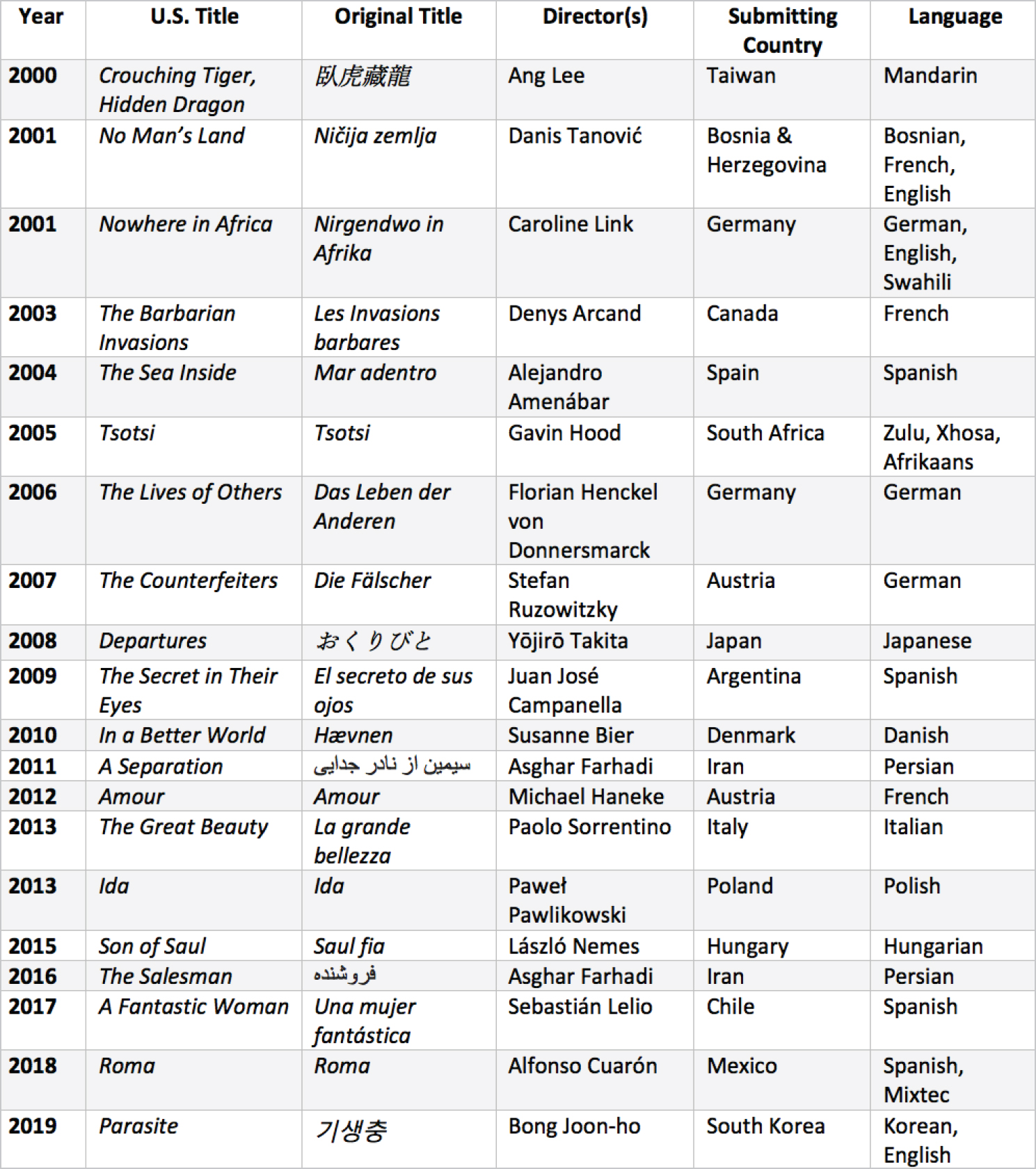 Frida (2002), directed by Julie Taymor and produced by Salma Hayek

EGOT is an acronym that stands for Emmy, Grammy, Oscar, and Tony. People or productions on this list have won at least one of these awards in the last twenty years:

A Gentleman’s Guide to Love and Murder (musical)

Birdman or (The Unexpected Virtue of Ignorance) (film)

In the Heights (musical)

No Country for Old Men (film)

Sex and the City (television)

The Book of Mormon (musical)

The Lord of the Rings: The Return of the King (film)

The Shape of Water (film)

People on this list are Americans (or people who spent a significant part of their writing careers in the United States) and have won the Nobel Prize for Literature (at any time), the Neustadt Prize, or the Pulitzer Prize for Fiction in the last twenty years.

People on this list have received a Kennedy Center Honor in the last twenty years for their contributions to American culture, regardless of their citizenship.

The Who (Pete Townshend and Roger Daltrey)

Named after the nineteenth century American humorist author, this prize is given to people who “had an impact on American society in ways similar to the distinguished 19th-century novelist and essayist Samuel Clemens, best known as Mark Twain.” This often means that awardees have commented on society and social injustice in ways that make us laugh. The first award was given out in 1998.